Many may have read this passage but was unclear to the meaning of it. The book of Revelation is ofcourse written in symbols as stated in Revelation 1:1 by the word signified, which means to put into symbols.We will identify in this study the real meaning of this symbolic language.

What is a beast? 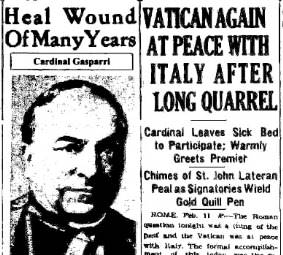 And the last thing that we will cover is the number 666. Many believe this to be the mark of the beast; rather it is the identification of a man. The official title of the pope is “Vicarius Filii Dei”, which translated is, “Representative of the Son of God”. The Catholic newspaper Our Sunday Visitor of April 18, 1915 wrote: “The engraved letter on the pope’s Mitre is as follows: ‘Vicarius Filii Dei ‘”. Now the bible states, “let him that hath understanding count the number of the beast: for it is the number of a man…”  (Revelation 13:18). Let us count this title in roman numerals to see if it adds up.

Let us take a look at a few celebrities flashing this symbol. You may say they are just doing it for fun, or it means “A OK”. This is a sign or gesture that is connecting to the occult. An occult which has ties to the Jesuit order. May we all do our research, the bottom-line is who we pay homage to now, will determine our destiny. Whether unto life or death.

Amazing the accuracy of this “old book” called the Bible. Undoubtedly, we see how coherently the Papacy fits the description of the 1st beast. Why is identifying this beast important? Because we are warned about receiving the mark of this beast and we can identify its mark only if we know who the Beast is.

See Study, “What is the Mark of the Beast?“.